PPC Board Metting: The Port of Pittsburgh Commission quarterly board meeting will take place at the PortPitt offices on Friday, January 27, 2023 at 12:00 Noon. See Events calendar for details and agenda.

Special Report on State of Emsworth Locks and Dams

Emsworth Locks and Dams are located on the Ohio River immediately downstream of the City of Pittsburgh.

The main channel dam and locks are located at river mile 6.2 and the back channel dam is located at river mile 6.4. The Emsworth locks consist of a 110 ft wide by 600 ft long main chamber and 56 feet wide by 360 feet long auxiliary chamber. The structural components of the project are the oldest of any project on the Ohio River, dating back to 1919 to 1922 when Emsworth was constructed.

The Emsworth Dams are presently in an exigent situation. Four significant project features – the scour protection, vertical lift gates, gate operating machinery and emergency bulkheads – were identified to have a high risk of failure. Prior to temporary, emergency repairs to the scour protection downstream of the dams, there were 10’ deep scour holes and 65 percent of the scour protection was in a failed state. A temporary repair was completed in February 2005 by in-filling the scour holes with stone. Due to the temporary nature of the repair, soundings are required on an annual basis and following major flood events until a permanent repair is in place. Due to the extremely corroded state of the dam gates, failure of any one of the thirteen lift gates would most likely cause undermining of a portion of the stilling basin causing it to fail and possibly undermine the dam causing the dam piers to be displaced. There is presently a 76 percent likelihood of failure of one of the dam gates. The gate operating systems are proven to be unreliable, due to multiple failures within the past several years. The emergency bulkheads were determined to be unsafe to work behind and therefore replaced in 2006.

The best plan for the locks will be evaluated as part of the Upper Ohio Navigation Study. A Major Rehabilitation Evaluation Report for the dams recommending the project was approved in 2002. The project includes providing permanent scour protection and replacement of the vertical lift gates, gate operating machinery and emergency bulkheads. $3.5M was provided in 2004 and 2005 through the Dam Safety Seepage and Stability program and an additional $32M has been provided through FY 2007. The FY 2008 President’s budget request includes $43M for this project. Features of work that have been completed and/or initiated include temporary scour protection downstream of both dams, fabrication of emergency bulkheads and dam gates, replacement of back channel dam gates, bulkhead hoist replacement, and design of the permanent scour protection and abutments stabilization. Work scheduled for future years includes replacement of main channel dam gates, dam scour protection and dam service bridges. With efficient funding, the project will be completed in 2014. 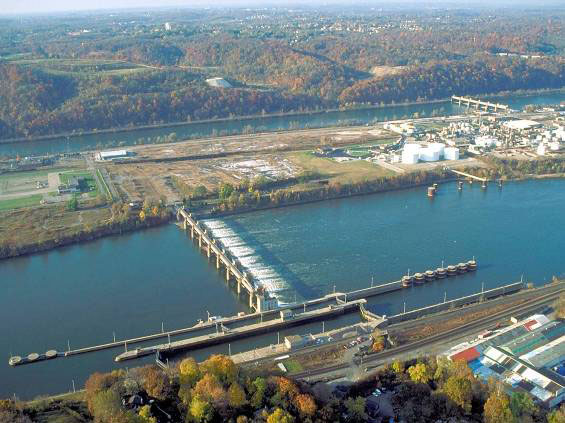 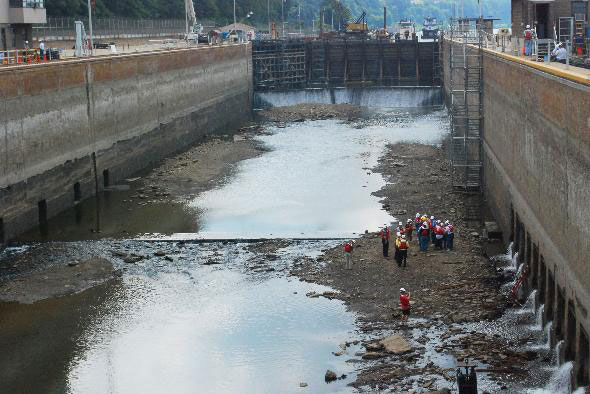 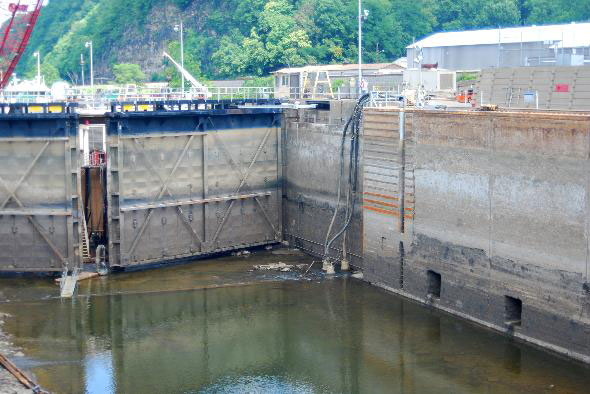 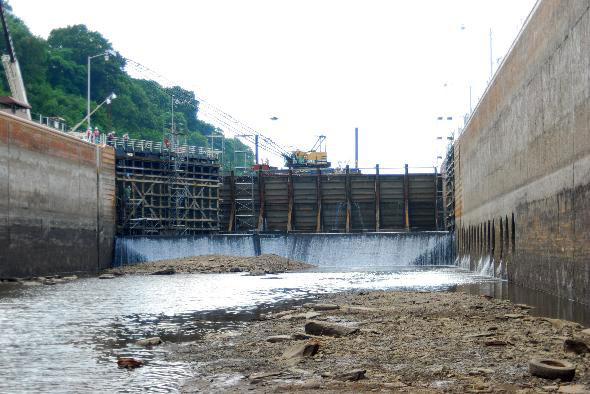 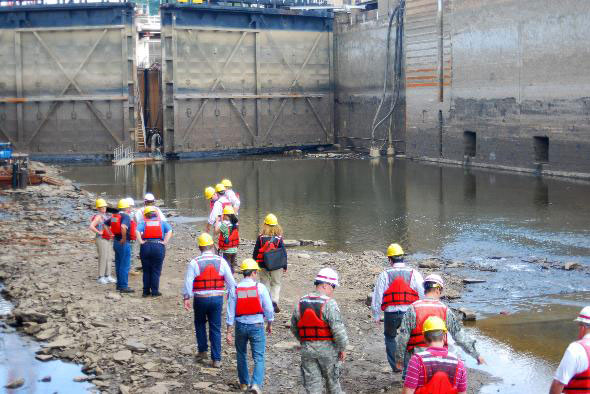 Transportation Importance to the System

Emsworth L/D is the first of six navigation facilities on the Ohio River operated by the Pittsburgh District.  Coal is the principal commodity at Emsworth. Electric utilities move coal from mines in Pennsylvania and Ohio to power plants serving the mid-Atlantic, southeastern and Midwestern regions of the country. Steel companies move coal from West Virginia and Kentucky mines to coking facilities above Emsworth. Construction companies use the project to move materials like stone, sand and gravel, and cement into the Pittsburgh area.

Issues and Other Information

Until the dam gates and machinery are replaced and permanent scour protection is provided the loss of the Emsworth Pool may occur. The total benefits of traffic through Emsworth reflect a savings of $300 million each ear over other modes of transportation. If the Emsworth pool is lost, two major facilities dependent on river transportation are impacted – the US Steel Clairton Works, the largest coke plant in the United States and the Bailey/Enslow Fork Complex owned by Consol Energy, the largest underground coal mine in the United States. Disruption in coal supply and transportation would also impact steel plants and coal-fired electric power plants. The impact of the loss of Emsworth pool on the local economy and other communities would be substantial. Approximately 11,700 jobs would be directly at risk due to loss of navigation and disruption to services and material. The loss in wages alone would range from $1.5 to $2.2 million per day.

A Major Rehabilitation Evaluation Report for the Dams recommending a $78 million project was approved in 2002. The total project cost was updated to $163.8M and approved in 2007. The dam gates, gate hoisting machinery, electrical power and distribution system, emergency bulkheads and a permanent scour protection system will be replaced with construction general funding beginning in 2005 and completed in 2014.

Temporary emergency repairs to the emergency bulkheads and scour protection were initiated in 2004 with operation and maintenance funding and were completed in 2005. Construction General funds were received, $5 thousand in 2004 and $3.5 million in 2005, under the Dam Safety and Seepage/Stability Correction Program.

In 2005 the design for the emergency bulkheads and Back Channel lift gate and machinery replacement were completed. This enabled a $2.4 million contract to be awarded in August 2005 for the supply of new emergency bulkheads and an $18.6 million continuing contract to be awarded in September 2005 for the replacement of the six Back Channel Dam lift gates and operating machinery.

In 2006 $14.935 million was received from the Construction General appropriation. $8.8 million was used to continue the Back Channel Dam Gate replacement, $1.6 million to fully fund the Emergency Bulkhead Supply Contract, $1.2 million to award and fully fund a Lift Gate Supply contract, $732 thousand to award and fully fund Emergency Bulkhead Hoist Supply Contract and $2.6 million to advance the engineering and design of the Main Channel Apron and Erosion Protection to enable construction award in 2008.

In FY 2007 the work allowance amount of $17M was used to continue the Back Channel Dam lift gates and operating machinery contract, fully fund contracts for the fabrication of Main Channel lift gates, and engineering for future contracts.

In FY 2008 $42.3M was used to initiate and complete the $2.36M main channel abutment stabilization contract and award the main channel dam gate, machinery and scour protection replacements base contract for $34.44M and engineering for future contracts.

In the FY 2009 appropriations act and in the FY 2009 President's budget, this project was identified to equally share the total construction cost with the Inland Waterways Trust Fund.

The optimum plan in 2010 through 2014 includes the use of fully funded construction contracts to complete the remaining scope of the Rehabilitation Project for the Dams. There are additional repairs to the dam that would be operations and maintenance funded and is interrelated to repairs being completed with construction general funding and necessary for continued safe operation of the dam. These repairs are documented in the Major Rehabilitation Evaluation Report and the latest Periodic Inspection Report and include repairs to the piers, abutment, bulkhead storage pit, and service bridge deck. The concrete repairs would be designed and constructed concurrently with the construction general funded contracts. Additionally themaintenance cranes need replaced, gate brake units need replaced, and the bulkhead hoist needs reconditioned. Additional temporary repairs to the scour protection could also be necessary given the past history of stone protection displacement and recent high flow conditions. Completing the needed operation and maintenance funded repairs concurrently with the construction general funded contracts would achieve economy of scales savings and cost less instead of completing them under separate contracts. The cost to complete this additional work on the dams is estimated to be $5 million.

Navigation improvement opportunities are being evaluated under the Upper Ohio River, Emsworth, Dashields, and Montgomery Navigation Improvement Study.  When permanent improvements at Emsworth Locks will be initiated is uncertain. Miscellaneous repairs are needed now to keep the lock operating safely and reliably. Included are replacement of the hydraulic system cylinders and hydraulic piping repairs, tow haulage system replacement, upper guard wall fender system replacement and downstream mooring cell replacement. The cost to complete the work on the locks is estimated to be $5 million.

O&M projected 5 year (FY 2010 through FY 2014) average cost to operate and maintain Emsworth Locks and Dams at an acceptable level of risk is $4.0M per year. Maintenance items include maintenance, repair, and/or replacement of lock operating equipment; lock gates, anchorages, and sills; lock valves; lock walls; dam operating machinery; dam bulkhead and hoist; and hydraulic systems. These costs are above and beyond the routine day to daymaintenance of all system components. This cost does not include any costs associated with the rehabilitation of the dams.